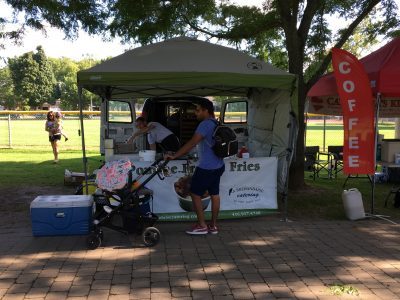 What a shame we had a wet, grey and cool day on Saturday for Culture Days which the Farmers’ Market celebrates with an annual Soup Fest. The weather kept the crowd small but those who came thoroughly enjoyed tasting the Market Chefs’ soups. Cathy of Catharina’s Café made a hearty and spicy red lentil and black bean soup, Pascal of La Brehandaise Catering made a minted pea soup, I made an African peanut soup to honour the setting of One Book One Aurora’s choice, “Sweetness in the Belly”, and one of our sponsors,  Kitchen Living by Duenas, contributed a squash and lentil soup. As always, the tasting table was a popular spot and I think that all the soups disappeared during the tasting.

Now here’s an update on one of our original farms. Coopers Farm was established in 1993 when Steve and Lisa were married and soon after welcomed a daughter and a son. Steve worked alongside his Dad and brother farming in the traditional manner. They soon realized that there were changes in farming and they had to expand and head in their own directions. Steve and Lisa chose to go on their own continuing with their small road side presence on Yonge Street in Newmarket. Originally selling only sweet corn, they began growing fresh produce to sell there too.

Since then, they have evolved into attending farmers’ markets, becoming a CSA Farm(where the public joins the program and receives fresh produce in return), have built a farm store and have a major road side presence during corn season( 38 years this summer!).The Coopers have long been known for their sweet corn which is always picked first thing in the morning. They grow some of the best varieties of corn for their customers to enjoy.

With Steve’s knowledge of small plot farming and his ability to raise animals and Lisa’s way of providing great customer service, the natural evolution was to grow and produce directly for the public. Recently they added a sugar bush producing maple syrup, expanded with a cow/calf operation and brought their son(7thgeneration farmer in the family) and his fiancé to join them.

The CSA encompasses vegetables, fruit, beef, pork chicken with some egg and turkey availability. They deliver to most of the GTA including Aurora, Newmarket Georgina, Richmond Hill, King City, and Toronto. Their on farm store provids people with the ability to eat seasonally as they offer what is coming from the fields. They also sell pasture raised beef, pork and chicken for an amazing taste experience. The store also carries assorted jams, preserves, and pre-made meals all prepared in their on site kitchen. They always use the best quality ingredients and make it just like your grandma used to do. They even render their own lard for the pie dough. As an extra, they now offer entertainment starting on Labour Day weekend with a 10 acre corn maze and many other on farm activities including u pick pumpkins, strawberries and raspberries. I encourage you to check out their booth at the Aurora Farmers’ Market on Wells Street to see the many varieties of produce they bring every Saturday.