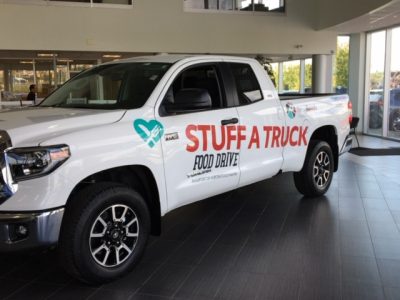 We have just experienced another lovely day at the Farmers’ Market. While it began as a rather chilly morning, it turned sunny and warm by 11 am and became very busy. Unfortunately, our plans for the Kick Off to our “Stuff the Truck” campaign hit a last minute snag and had to be postponed. Also, our scheduled band cancelled-talk about the best laid plans….

Now, a word about two new vendors this year- Dave and Carina of “Not Just For The Birds” who make the wonderful bird feeders and more. They have lived in Aurora all their lives and both love the outdoors. They like maintaining a beautiful yard and admire the wildlife, especially the variety of birds who regularly visit them.

Dave’s birdfeeders had an interesting genesis. Apparently Dave had some left over plexiglass from a project they were working on and didn’t know what to do with it. So he had the idea to create a bird feeder out of composite since the ones they had purchased from stores just didn’t hold up well and constantly need replacing. Dave added stone to the one he made to make it more decorative and that helped to make it more stable. They hung it outdoors and the birds seemed to love it, so he made several more. Now he has quite a few different styles and colour choices.

Soon friends and family members were complimenting the feeders and requesting one for themselves. They were so impressed with the feeders that they suggested that Dave should start to sell them to the public. That inspired Dave to make a mobile display trailer which he drove to the end of their driveway on weekends to display and sell the feeders.

One day another brain wave hit the creative couple. They decided they wanted to add more beauty to their yard. They had several pine trees growing but knew that they weren’t good for heating the house, so they cut them into 16” lengths and made planters. This proved to be a lot of work in drilling them out but the end results were aesthetically pleasing planters.

Their remarkable creativity didn’t stop there. They live with a German Shepherd/husky mixed breed dog. They noticed that when she was eating, her dog bowl would invariably end up at the other end of the kitchen—I’m sure many of you can identify with this occurrence. So Dave decided he needed to make her a stand for her bowls. He bought another length of composite, cut out holes for the bowls and accented it with stainless steel legs and hardware. It turned out beautifully. But he realized that he couldn’t just ignore the cats so he created a smaller version for them. Our resident feline is receiving one for Christmas!

Dave and Carina will be at the Market a few more times this season and may be at our indoor Christmas Market at Town Hall on November 30. There will be more about that as details are finalized. Please plan to visit their “Not Just for the Birds” booth in Town Park to view their wonderful and unusual creations.

When I know more about when we’ll be rescheduling the Kick Off to the “Stuff a Truck” Campaign, I’ll let you know. In the meantime, please collect your food donations so we can feed as many Aurorans in need as possible. Thank you!