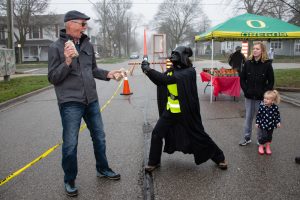 It was another cold day at the Market on Saturday, particularly in the morning. However the sunshine improved things and brought smiles to peoples’ faces. It can only get better from here, right?

Given that, at this point in the season, we have fewer new vendors than usual, we’re going to write about long time vendors you haven’t read about in several years. We’re starting with Mike Howard of Howard’s Farm who is one of the original vendors when the Aurora Farmers’ Market began in 2002. The Howard family has deep roots in Newmarket history. Michael is the 6th generation Howard in this history. Mike’s grandfather, Ken, lived on the Century farm at the corner of Green Lane and Main Street north. There was a maple sugar bush on the farm where Mike and his sister, Lori, spent every spring gathering sap, collecting wood to feed the fire while watching Grampa boil the sap into maple syrup. At the end of the season, Grandma Howard hosted a “sugaring off” party where family and friends came and made taffy-pouring hot syrup over clean snow or ice and twirling with a fork to make taffy. They made sugar cakes too. This process took longer as a bowl of hot syrup was beaten by hand until it thickened. The thickened syrup was poured into muffin tins to finish setting.

Mike grew up farming on the2nd concession in Newmarket. The farming continued with beef cattle,, chickens and mixed farming. Mike was an avid ball player and the Howards spent many nights and weekends in ball parks all over Ontario. In between ball parks, Mike spent many hot, sunny days on hay wagons unloading hay into the barn.

When the Aurora Farmers’ Market began in 2002 in the parking lot on Temperance Street, Mike signed on to become a vendor, following in his Dad’s footsteps. Don Howard is a long time vendor at the Newmarket Farmers’ Market.

Mike was 25 years old when he started at our Market. He is now a married father of two lovely children- Madeline is 9 and often helps Mike at the booth and Benjamin is 6 and occasionally comes too. The next generation of Howard farmers is beginning their history! The Michael Howard family live on a hobby farm on the Herald Road where they have horses, chickens and 2 goats.

Mike brings various cuts of beef, pork and chicken to our Market as well as sausages, bacon, eggs and cheese. He also carries bread, pies and muffins from Hurst Bakery, augmented by sister Lori’s apple pies and cookies. Later in the season Mike will also have beautiful cut flowers from the farm. Be sure to visit Mike Howard’s booth on Wells Street to see all the wonderful items he has. He will take orders for a large selection of meat which you can then pick up on a subsequent Saturday.

Our first Special Event of this season will be our Spring Festival on May 25th. The entertainment will be provided by “The Therapy Seekers” who proved to be very popular last year. There will be free crafts for the children, a draw for a Market bag full of goodies and some surprises. Be sure to put this day on your calendar and plan to join us.